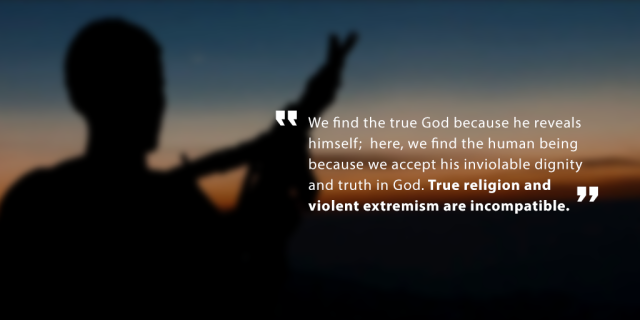 It is my deep honor to be called upon as a religious leader to initiate discussion on Peace and the Prevention of Violent Extremism.

The Ateneo de Davao University (ADDU) is a Catholic, Jesuit and Filipino University. Since I became its President seven years ago, it has articulated and embraced its mission to inter-cultural and inter-religious dialogue, which it believes at heart to be a faith-based mission. In the landscape of diverse religions and diverse cultures in southeast Asia, where in one country Islam is dominant and in another country Christianity is dominant, we believe the imperative to inter-cultural and inter-religious dialogue is rooted in one God of compassion and peace. The compassion and peace is not for the God who relates with us, but for us who in our moral brokenness need his compassion and in our endless warfare cry out for his peace. We consider it one of the profound scandals of our history that the most violent wars and atrocities are called and executed in the name of God.   With Pope Francis we might ask: if God is a God of compassion and peace, who is the god who is glorified in the self-righteous condemnation of the other and in the wars and atrocities committed “in God’s name”. The imperative for dialogue is rooted, I believe, in a God of Compassion and Peace who created us diverse in cultures and religions and is glorified in finding his will in the profundity of our diversity.

It is in this context that at the Ateneo de Davao we host the Al Qalam Institute for Islamic Identities in Southeast Asia directed by Datu Mussolini Lidasan, now a member of the Bangsamoro Transition Commission. We support the struggle of the Filipino Muslims, in the diversity of their receptions of Islam, for a homeland in the Philippines, whose warrant is their shared culture and shared religion in Islam. Where the Catholic faith today acknowledges religious freedom and clearly states that no person can be externally forced to embrace any religion against that person’s conscience, we acknowledge that methods of Christian evangelization in the past may have focused too much on “conversion”, failed to appreciate the religiously valid practices in Islam which truly acknowledged the one God of compassion and peace, failed to acknowledge the Christian shortcomings in translating faith into praxis, and encouraged a cultural attitude which from the “rightness” of Christianity looked down on the Muslim who in his fidelity to Islam was “wrong,” less-than-human, and therefore a second-class Filipino  We acknowledge the notion that in this context in the Philippines, what are referred to as “historical injustices” were committed against the Filipino Muslims.   Though the Spaniard never conquered this people whose mature sultanates preceded the coming of the Spaniard by two centuries, Spain sold them to the US along with the rest of the Philippines. Under the Americans, they were deceived, brutally massacred, minoritized, marginalized, and deprived of their lands. They were “Filipinized” by imposing on them the rule of northern Christian Filipinos, which continued throughout the Commonwealth period and after Philippine Independence. This rule was more interested in building the Filipino nation centered in the north and the exploitation of the natural resources of Mindanao for the north than in the respect for a Muslim identity and culture and a right for a Muslim homeland. The call for Muslim Independent Mindanao was met with private then state-supported vigilante violence, Marcos-led martial law, and later with Estrada’s all out war. In the 40-year quest for peace mediated by the Organization of Islamic Countries which followed, the GRP has so far failed to keep its commitments so that today the Bangsamoro quest for a homeland is still outstanding.

Therefore today’s increasingly-acknowledged urgent need not only for inter-religious or inter-faith dialogue, but also for intra-religious or intra-faith dialogue. As Muslims and Christians seek to find their way to closer understanding and respect for each other in the other’s privileged way of worshipping the one God, both Muslims and Christians are also invited to find deeper insights into various receptions within their particular faith traditions in the hope that the deeper one delves into the truth of a particular reception the more one finds unity with the God whose oneness unites, and does not divide, who holiness sanctifies, and does not desecrate, whose compassion uplifts, and does not degrade. In both inter- and intra-religious dialogue we are invited to prostrate ourselves before the God of Truth to admit in humility that the truth of our lives has fallen short of the truth of his will, and that we worship too often with empty words and gestures rather than in the surrender of our hearts to the divine will. We are invited to notice that before this God of Truth we have no monopoly on truth, and no warrant to monopolize truth, and certainly no need to speak and act as if we were Truth. We are invited to notice, accept and even cherish that one who worships God in another religious tradition or in another reception of my faith tradition may be blessed with profound access to Divine Truth, which I am moved to admire in praising the inscrutable ways God works with his creatures, often in manners which go beyond anything I have been trained to expect.

The prevention of violent extremism, therefore, from the religious viewpoint may involve the religious acceptance through dialogue that we are created plural, that no one has a monopoly on Truth, and that to bring extreme violence, pain, suffering, death on human individuals or on humanity in the name God is a betrayal of God and an idolatrous reduction of religion to a mere ideology bereft of God. This is not a relativization of revealed religious truth which always brings us into a relationship with the one God of Compassion and Peace, but merely a relativization of the absolute positions that we take as human beings in the name of God – be this the God of the Crusader, the Inquisitor, or of the Mujahideen – which seem to justify anything – arrogance, condemnation, oppression, violation of human rights, torture, killing, mass destruction. But the absoluteness of God’s truth is not ours as human beings, and to claim it is blasphemous. The safest indicator of truthful relationship with God is that in this relationship we become more truly compassionate and more truly dedicated to peace. In this relationship there is always great awe and deep humility; here, we find the true God because he reveals himself; here, we find the human being because we accept his inviolable dignity and truth in God.

It is not less religion that prevents violent extremisms, but less false religion.