Talking Points Towards a Revision of Policy-Standard to Enhance Quality Assurance (QA) in the Philippine Higher Education through an Outcomes-Based[1] and Typology-Based[2] QA (CMO 46 s. 2012)

[CHED could reward excellence on the basis of points earned for indicators of excellence, cf. 7]

[2] While the typology of an HEI may be an important issue, it unduly complicates a CMO on Q an QA. It can be the object of a separate CMO. More important than HEI typology is to achieve consensus on Q, the iterative development of Q, and the role of QA in this iterative development. Against this and its importance for our HEIs’stakeholders, namely. humane humanity or “nationalism” or the “common good” to which industry must be subordinated, HEI typology is of secondary importance.

[6] This will empower HEIs to appreciate and implement their mission and vision.

[7] This is innovative in this proposed revision of the CMO: an array of indicators of excellence proposed by Dr. Gina Montalan (for discussion, revision, ongoing improvement) provides the basis for HEIs to distinguish themselves and to find recognition through the QA process.

Table of Indicators of Excellence and Rewards System 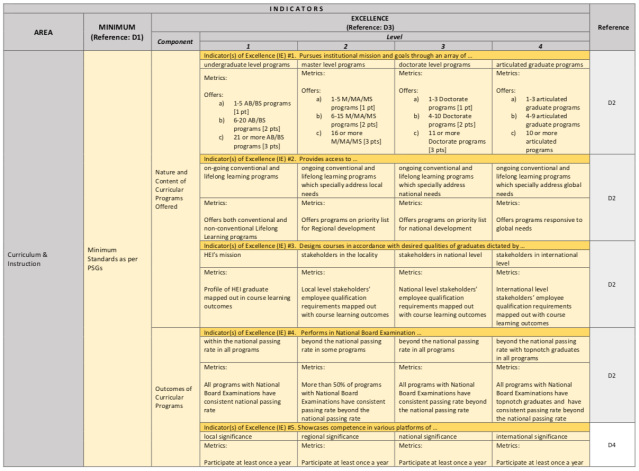 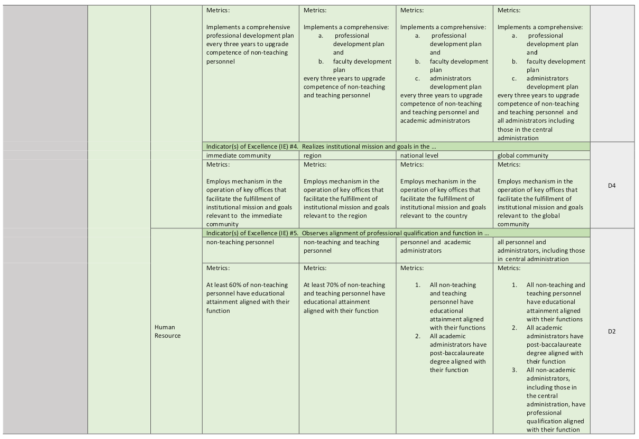 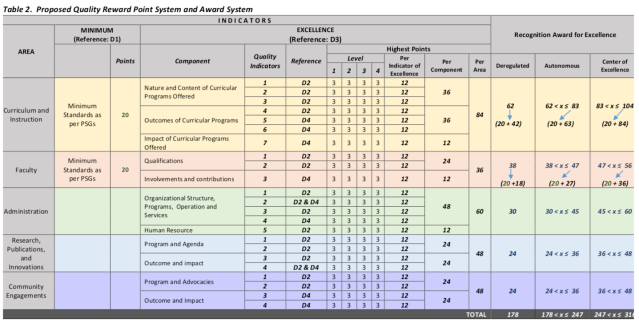 Understanding the TEI and the Rewards System

Understand it in the backdrop of the Higher Education Quality Framework: HEI Q is understood necessarily in the achievement for four dimensions: (DI) Minimum Standards, (D2) Implementation of the Vision Mission of the School, (D3) Achievement of Excellence in Learning Outcomes, (D4) Responsiveness to Stakeholders. HEI Excellence is in the HEIs achieving and going beyond minimum standards (DI) in academic freedom.

HEI Excellence is mapped out in the TIE.

HEI Excellence can be achieved variously, according to the M-V of the HEI and its historical circumstances.

The relevant dimension of Quality – D1 to D4 – is indicated as is relevant for every Area. D1 is only indicated when there is a governing PSG. The Excellence in Achieving Learning outcomes (D3) is achieved often simultaneously with the implementation of vision/mission (D2) or with responsiveness to stakeholders (D4).

Areas of possible HEI Excellence have different Components:
Every Component has different Indicator(s) of Excellence (IE) for the Area.

Every IE for an Area has Metrics
The IE and Metrics are ordered into four levels. Lower numbered levels, however,

are not pre-requisites of higher-numbered levels.

The table can be approved. But with use, it can be periodically evaluated and revised.

The compliance with each indicator of excellence (of a component of an area) receives up to three points. The table shows the highest possible points per component per area.

But where there a declared institutional focus on the IE of an area component [e.g. responsiveness to local and not national needs), application for up to three bonus points can be made for that IE.

You cannot apply for HEI Excellence unless you have achieved minimum standards in at least two iterations.

An iteration is possible every year.
20 for min standards in C&I and 20 pts for Faculty are a prerequisite to apply.

All else is a matter of showing where your excellence is.
One range is for Deregulation. [At least 50% of highest points of Excellence in all areas.]

One range is for Autonomous status. [At least 50% in each of the three areas (Admin, Research, Publications and Innovations, and Community Engagements) and at least 60% in areas of Curriculum and Instruction, and Faculty.]

One range is for Center of Excellence. [at least 75% in each of the three areas (Admin, Research, Publications and Innovations, and Community Engagements) and at least 80% in areas of Curriculum and Instruction and Faculty. ]

SECTION 1. SHORT TITLE. This Memorandum Order shall be hereinafter referred to as the “CMO on Quality and Quality Assurance for HEIs,” for brevity.

SECTION 2. LEGAL BASIS. In accordance with the pertinent provisions of the 1987 Constitution and related laws that mandate the State to “enact measures protecting and promoting the right of all citizens to quality education at all levels and shall take appropriate steps to make such education accessible to all[1],” as well as ensure that “academic freedom shall be enjoyed in all institutions of higher learning, promote its exercise and observance for the continuing intellectual growth, the advancement of learning and research, the development of responsible and effective leadership, the education of high-level and middle-level professionals, and the enrichment of our historical and cultural heritage[2],” this Memorandum Order is hereby issued.

As operationalized in this CMO, academic freedom shall concretely be understood as the recognized ability of the higher educational institution (HEI, for brevity) to achieve the minimum standards set by government, to implement its mission appropriate to its vision (identity), to achieve standards of excellence in learning outcomes, and to satisfy its particular stakeholders as a responsible part of the Philippine educational system under current historical conditions.

The Framework consists of four sets of interrelated principles, namely:

A fundamental principle in quality assurance of higher education is that quality primarily rests with the HEIs themselves.[8] This is undertaken by the HEI in the fullest expression of its academic freedom.

The culture of quality assurance therefore contemplates the development or acceptance of systematic internal and external checks and metrics of quality by the HEI.

Any HEI that manifests its willingness to be assessed under the QA framework outlined in this CMO must categorically declare and present sufficient documentary evidence that it has achieved the minimum standards prescribed by the CHED pursuant to its regulative function and as articulated in the various existing PSGs — being the “first dimension” of QUALITY in the QA framework. This is also a condition sine qua non for an HEI to be regarded as a candidate for Quality Assurance (QA) assessment by an EQAA.

As regards PSGs that may be issued by the CHED, the same shall be prepared and finalized after a clear process of consultations with its Technical Panel and the affected HEIs are made, with a view to keeping minimum standards at its minimum, against which HEIs shall distinguish themselves in excellence.

Having declared itself compliant with the minimum standards prescribed by the government thru CHED, the HEI then declares how it distinguishes itself in quality through compliance with the various indicators of excellence.

As may be seen in the Table of Indicators of Excellence ( appended herein as Annex “A”), there are five identified areas where standards or indicators of excellence can be measured against. These are in the areas of: (a) curriculum and instruction, (b) Faculty, (c) Administration, (d) Research, Publication and Innovation, and (e) Community engagements.

An HEI, in academic freedom, can choose to declare itself as having achieved excellence in all the areas, or it can opt to focus on only one or two areas, and delving into the components and the various levels of each area, in consonance with its vision and mission.

As the IQA properly belongs to the HEI and is presupposed as already functioning in the HEI’s declaration, the EQAA then checks the HEI declaration using the External Quality Assurance Standards and Processes and whether said declaration is in fact, true. In this process, qualifications are quality assured and therefore recognizable in other ASEAN countries.

All indicators of excellence as articulated in the Table of Indicators of Excellence (Annex “A”) correspond to a range of reward points (further elaborated in the Tables of the Proposed Quality Point System, Quality Reward Point System, and Recognition Award System, appended to this CMO as Annexes “B”, “C”, and “D”) that will be used as the basis in determining what recognition is to be awarded to the HEI.

Based on the judgments of the EQAA, the CHED in its developmental function, recognizes three HEI statuses:

and shall accordingly provide rewards or incentives to these quality HEIs as it sees fit through the grant of: additional scholarships, grants towards institutional development, status and privileges of autonomy, centers of excellence, priority access to TES funds, and other similar fiscal incentives.

SECTION 12. DEVELOPMENTAL FUNCTION OF THE CHED.

As the collegial body tasked by law to reasonably regulate higher educational institutions, the CHED is also mandated to  monitor and evaluate the performance of programs and institutions of higher learning for appropriate incentives, as well as identify, support and develop potential centers of excellence in program areas needed for the development of world-class scholarship, nation building and national development.[10]

In the exercise of these developmental functions, the CHED can recognize and encourage the exemplary implementation of an HEI’s vision and mission, excellence in learning outcomes, high responsiveness to stakeholders by prescribing supplemental memorandum orders and/or guidelines for the grant of additional scholarships, grants towards institutional development, status and privileges of autonomy, centers of excellence, priority access to Tertiary Education Subsidy funds under RA 10931 (a.k.a. the “Universal Access to Tertiary Education Act of 2017), and other similar fiscal incentives to those quality HEIs assessed under this QA framework.

SECTION 13. All previous issuances pertaining to the status conferred on HEIs that are inconsistent with this CMO are hereby deemed repealed, revoked or rescinded.

SECTION 14. This CMO shall take effect after fifteen (15) days following the publication of the same in a newspaper of general circulation and/or in the Official Gazette.