Life to the Full. Nothing Less!

On the eve of your graduation, what is the special message the Lord is giving you through the readings of the liturgy?

In the Gospel passage for today from the 7th chapter of John, Jesus is struggling with a situation that will eventually cost him his life.  He is the Word incarnate come to “bring life, life to the full” (Jn 10:10).  But to bring us this life, people must believe in him.  People must believe he is “way, the truth, and the life” (Jn 14: 6).  To call forth this belief, Jesus worked out signs:  he changed water into wine at Cana (Jn 2:1-11); he healed the royal official’s son in Capernaum (Jn 4:45-54); he healed the paralytic at the pool of Bethesda despite it being the Sabbath (Jn 5:1-15); he fed the multitude of some 5000 people with five barley loaves and two fish when he later introduced himself at the Bread of Life, the living Bread come down from heaven (John 6: 5-14.35.51).  Later, he would heal the man born blind from birth, and very provocatively raise his friend, Lazarus, from the dead.  The signs he gave made him very controversial.  Through the signs many came to believe in Jesus as the long-awaited Messiah; but through the same signs, others were scandalized, did not believe, judged that Jesus was breaking the law or was outright blasphemous.  This is the context of our Gospel for today.

It is the time of the Feast of the Tabernacles, the Feast commemorating the Exodus when devout Jews were under obligation to make a pilgrimage to Jerusalem. Jerusalem was the site of the Jewish temple, but also the center of the scribes and Pharisees, the hotbed of suspicion against and opposition to Jesus.  Here, the Gospel says outright, “the Jews were trying to kill him.”  For this reason, Jesus does not want to go there.  But his disciples, themselves trying to understand Jesus’s signs against the opposition of the Jews, urge him to attend the Feast in Jerusalem, confront his opposition, score a victory for himself and all of them.  But that was dangerous!  Jesus, knowing his time had not yet come, says he will not go.  His disciples should go to the Feast without him.  And they do.

But needing to be faithful to his mission, Jesus goes anyway, at first, secretly, then openly.  He teaches in the temple, provoking controversy, but winning believers.   The Jewish opposition hears of his presence;  they approach him.  They marvel at his teaching, but say he could not be the Messiah because they know he is from Galilee; it would not be known where the Messiah is from.  Jesus insists that what he teaches is true; it is the message of his Father, so why should they want to kill him?  They deny wanting to kill him, even though they did, causing confusion among the onlookers who’d heard they’d wanted to kill him, so why are they not arresting him?  Jesus maintains he is from the Father and one with the Father and the only way to the Father, causing the Jews to want to arrest him, to stop him from misleading their followers.  But his time had not come. 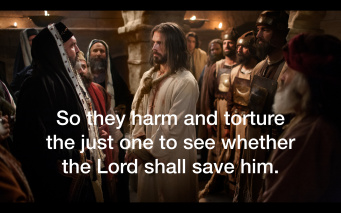 The situation reflects what is described in our reading from the Book of Wisdom.  “The wicked said among themselves, thinking not aright, ‘Let us assail the just one, because he is obnoxious to us; he sets himself against our doings, reproaches us for transgressions of the law and charges us with violations of our training.  He professes to have knowledge of God and styles himself as a child of the Lord…’” (Wis. 2; 1a).  So they harm and torture the just one to see whether the Lord shall save him.  The truth Jesus brought was obnoxious to his enemies.  When his time had come, they cried, “Crucify him, crucify him!”

From his Cross, as you may have on occasion experienced in our Assumption chapel, Jesus looks into your eyes with compassion, peers into your heart with love.  He lived for you. He dies for you.  He is risen for you:  to give you a full, meaningful and joyful life.  Today, with all of your accomplishments, with all of your knowledge, he invites you to give yourselves to him, not just partially, but entirely.  With St. Ignatius, you are invited to respond: Take and receive, O Lord, my liberty.  Take all my will, my mind, my memory.  All things I hold and all I own are thine.  Thine was the gift. To thee I all resign.

An invitation.  Of course you can say no.  But you can also say yes.  That you may have life, life to the full.  Nothing less! 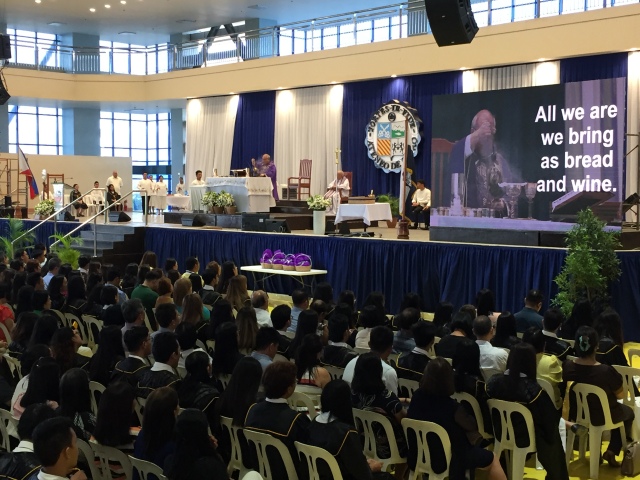 Jesuit. Educator
View all posts by Joel Tabora, S.J. →
This entry was posted in Homily and tagged Jesus’s signs, Life to the Full, Take and receive. Bookmark the permalink.